May 31st Newspapers With Pins 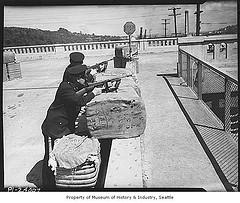 Monterrey, N. l., Mexico. One by one, the large printed newspapers in the United States have fallen victims of the migration of advertising to the internet and the global financial crisis. They have closed ancient newspaper dating back to 1860 and its permanence is on-line, such as the Seattle Post Intelligence and speaks of the San Francisco Chronicle to follow that same path. The closure of newspapers in United States is catastrophic and there are thousands of journalists, photographers, collaborators and employees who have been left without employment. In the case of Mexico, in the paradox, there have been closures of newspapers as those that occurred after the 1995 crisis. But most of the national newspapers called are with pins in the publishing market, inert before the barrage of the internet.

In Monterrey, some newspapers do not have nor page on the network while the leader, El Norte, merges sections. Since 1995 it did not retrieve new sections cancelled by the crisis and the difficult situation is now clearer. In the busiest corners of the Metropolitan Monterrey sold El Norte and gives the Metro. The battle is uneven: the local newspaper costs more in their manufacturing than the retail price, but compensates with advertising: the global free newspaper has capital from abroad and struggling to gain advertising contracts in a war of survival with multiple battle fronts. The printings of print media in Monterrey are short given the size of the Monterrey city; without being a master of marketing, it is easy to detect the situation at any convenience store. At eight in the evening is the newspaper RYA North and Millennium: other media have diluted presence. A person arrives at the convenience store, observes the covers and by 15 pesos buy a hot dog that has as a promotion a drink free. There is hunger for eating, and little to read, is the lesson that leaves the current economic situation.

But in this editorial war of survival, is exclusivity, design and promotion in search media guerrilla readers what will make the difference. If you close a newspaper between 400 and 150 thousand copies daily in the United States, what is expected in Mexico and Monterrey?. Question of remembering the closure of El Tiempo and more news in 1984, the rostrum of Monterrey in 1995 or recently word of Saltillo, on December 3, 2008. In short… If the newspapers disappear there with what ripen avocados, picking up trash, cleaning glasses or educate dog… Professional journalist specialized in economy and finance that analyzes money and its impact on our lives in their various activities and modalities. A column of life and money. You can visit me at. regionegocios. com mx Blogs related Think Adoption First Seattle Post Intelligencer (blog) GolfScratch Oscar Fraustro and team win Pro-Am in Monterrey GolfScratch Antonio Maldondado, defends title in Monterrey McCloughan out as 49ers GM San Francisco Chronicle Comment on mathematical aliens the paradox of Ross Man presumed drowned off Pacifica beach San Francisco Chronicle Observatory competitiveness CNC in media highlights investment in Internet advertising will surpass the media digital media is imposed on printed media in us .: Wawis:.


Posted in News by with comments disabled.